It’s my favorite day and time of year – Happy Halloween! This year we decided to be Nadja & Laszlo from one of our favorite shows on FX, What We Do In The Shadows. We love this show so much and scored these amazing Victorian vampire costumes from Halloween Costumes.

We are also big fans of the original movie but the show has a completely different vibe so they can’t really be compared. I think it’s some of the best comedy on TV right now, it’s worth a watch if you haven’t seen it and is available on Hulu.

I love her little Dolly so much! I tried to find it online but no one makes a replica – just art (which is also fabulous). I decided to just photoshop her in for that extra fake hilarious look, but I really do want one in real life! This also has given me some creative ideas for my art shop – stay tuned!

Have a very safe Halloween! I’m already thinking about what we are going to be next year… If you ever need inspiration check out our costumes from years past! [ here; and here; also this; and this ]

2020 is scary enough so we wanted to lighten the Halloween holiday mood by digging deep into our obscure 80s movie favorites: The Childless Yuppie Scum that live next-door to the Griswold’s in Christmas Vacation!

These silver sauna jumpsuits were the #1 thing that pulled this costume off. I found them by searching Amazon and there were many options, just put in “Todd and Margo” and “silver jumpsuit” and you’ll see a variety. It was also chill to sit around in these badboys and be “dressed up” without actually doing anything major.

The biggest time constraint was fixing my hair! I curled it with a tiny rod and teased it out big and put up to mock Julia Louis-Dreyfus. (Sidenote I just love JLD. Elaine will always be one of my top favorite characters of all time).

Because of Covid we hung back at our good pals place to watch movies and order pizza. It was a very mellow and safe Halloween.

Hope you all had as much fun as you possibly could have during a pandemic on the weekend before a major election!

If you know anything about me, you know how much I LOVE Halloween and how much I enjoy unique costumes. Some years I have much more time on my hands and can sew up an elaborate eccentric costume that wows people, other years even my “lazy costumes” I try to make as original as I can. The point is, I love Halloween and even with minimal effort you can have a BALL of a time! It’s been a few years since I recapped our Hallow-Queen efforts, so let’s take a trip down memory lane, shall we?

I’ve posted about our previous costumes on my Ghosts of Halloweens past write-up, chock full of ridiculous concepts like the Double Rainbow (hey it was 2010) or our Best Little Whorehouse in Texas couple costume (this was John’s intro to my ridiculous costume ambitions and our first together). And here is our 2016 couple costume of Goldie Hawn and Kurt Russell, one of my personal favorites because we went to a dance party on a boat and I walked around yelling things all night long like “I was a big fat SLUT?” and “ANDREW!” (if you love the original Overboard as much as me then this makes sense. And no, I will NOT watch the remake).

In 2017, John and I decided to be Janet Snakehole and Burt Macklin from Parks and Rec because we were lazy and just finished watching all of the seasons together. Though I will admit it’s not my most original costume – it was a lot of fun quipping off random one liners from the show to strangers in bars who got it.

2018 felt like a big ambitious year for us. We went as the fish/lady couple from The Shape of Water and turned many heads. We were even featured on the Fox Searchlight Instagram and Facebook channels! It all happened as a joke one drunken night, where John suggested it would be funny because it won the Oscar that year for best movie, and who in their right mind would do it? I then made it a reality by finding this insanely funny and ridiculous mask based off the character, found a teal onesie that he agreed to wear, and then crafted fish fins and FISH ABS out of felt that I later bedazzled. It was amazing. I just wore a plain red dress from the movie poster and also did a costume change into her denim/green apron getup so I didn’t make much sense without my fishman <3.

2019 also was a bomb dot com costume because we love John Malkovich SO MUCH we decided to go as Being John Malkovich. John was Craig (John Cusack’s character) and I was Lotte (Cameron Diaz) with my comforting chimpanzee Elijah. This one was so fun because I ordered a wig and ratted out the hair with a super tiny curling wand and brushed it out to try to make it look more like her frizzy hair. I think we did good with what we had!

This one was so much fun! We just loved making print outs of John Malkovich’s face for those sticks. What a hoot and show stopper at the party. John even made his own version of the marionette doll and we filmed “Craig’s Dance of Dispair” – L.M.A.O.

Halloween 2020 is now upon us. A weird year and not as festive as years past. We definitely have a chill costume planned, but it’s a great reference for those of you who love 80’s comedies. Check back in and see what we do, follow me on IG @djemils.

Have a safe, fun, and Happy Hallo-Qween!

This Halloween I fulfilled my dream of being the incredible Joanna Stayton, played by Goldie Hawn, from Overboard! I LOVE THIS MOVIE SO MUCH Y’ALL and have been thinking about doing this costume for YEARS #overboardforever. What’s great is that John loves Kurt Russell (as do I, hello HOTTIE ALERT!) and decided to be Snake Plissken from Escape from New York. We thought that it would be more recognizable for him to wear an eyepatch and go for Snake’s look because if we weren’t standing next to each other while he was Dean Proffitt, he would just be wearing plaid and would look similar to his everyday self (I guess he could have worn overalls and carried a tool box but truth be told, John doesn’t love Overboard the way that I do (HOW DARE HE) and he wanted to be Snake. COMPROMISE people! That’s what love is all about ❤ )

The point is, we both were characters we loved while representing a real life powerhouse in the love department. Kurt and Goldie are hands down my favorite celebrity couple and a great inspiration for relationships everywhere!

We ended up going on the Sunset Sound System boat party to celebrate Halloween (on top of another house party the night before). The Sunset Crew are a great group of local underground house + techno DJs that have been throwing the best parties (that happen to fall on Sundays) for over 20 years in the Bay Area. The boat parties are a ton of fun, are usually 3 floors, and feature edgy DJs from Berlin to NYC and all over the world (talk about LEGIT). This year I was STOKED to hear Prosumer. AND since I was on a boat, all night I got to say things like:

I made the jacket from a white satin robe, shoulder pads, gold rope, gold tassel ribbon, and sequins.

All in all it was a pretty successful Halloween weekend. People loved our costumes, we hungout with our fun friends, listened to great tunes, and got to ride a huge boat around the Bay!

Just for fun, I’ll leave you with one of my favorite clips. Hope you all had a Happy Halloween! Now I have to start brainstorming what I want to be next year… 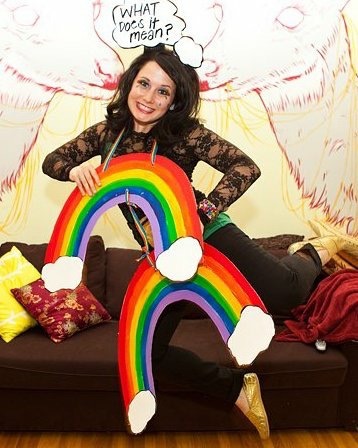 The MEME. Everybody remembers the DOUBLE RAINBOW! How could we forget thee? I painted glitter tears on my face and made a headband with a thought bubble that read What does it mean? In case you are one of the few that doesn’t remember, you should refresh your memory because it was one of the biggest memes of 2010. Memes are great because they are topical, so most people get ’em.

Group Concept. This was when we did a crazy cat lady and her cats. My friend Sara and I SEWED THESE CATSUITS ourselves and I remember feeling SO accomplished! It is also versatile and worked well as a unicorn, below, that I switched up a few years later when I djed at Go Bang! for Halloween. 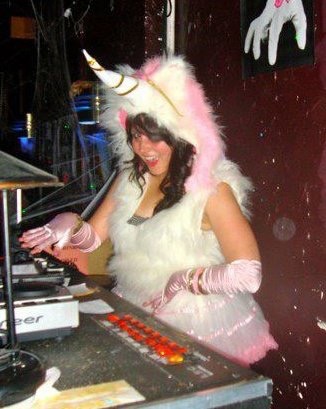 MAKEUP Only. Pop art make-up, anyone? This is a good one to do when you feel lazy but love Halloween parties and don’t want to dress up in the same costume several days in a row. Like when Halloween is on a Monday (as it is this year) and you know of parties Fri-Mon. (Hey, I’m a social butterfly, OKAY?!) #halloweenparties4life 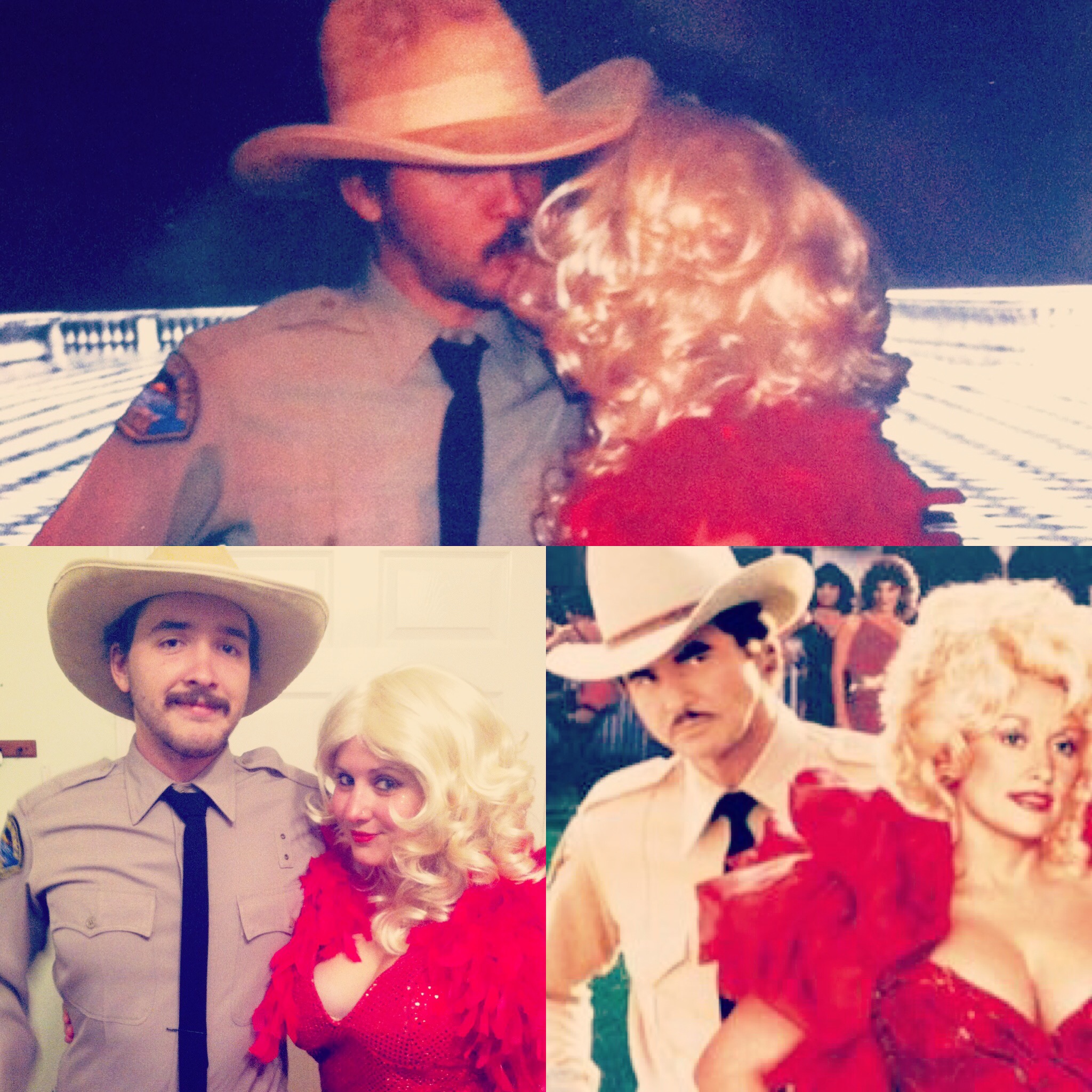 Quirky Couples Costumes. My favorite couples costume ever was when John and I did Burt and Dolly from Best Little Whorehouse in Texas. This was a true GEM of a costume and I’m so proud of how it turned out. John and I had only been dating for 6 months and when I asked him to be Burt Reynolds from the movie and he jumped on the opportunity. We quickly realized that we BOTH grew up watching the movie so it holds a special place in our heart. It was then I knew he would be the perfect mate to dress up alongside me for all sorts of costume situations…

And for fun, here is a throwback of John and I as a fembot and a shark with a friggin’ lazer beam attached to his head, per the BEST TRILOGY OF ALL TIME, Austin Powers! (Yes Austin Powers is really my favorite trilogy of all time. No, this is not a sponsored post from Austin Powers. No one has paid me to say this. My love for Austin Powers is REAL people. So real, that when my sister Bryana got married, she booked an Austin Power’s impersonator to DJ. #austinpowersforever). Also this costume was from Bay to Breakers and NOT Halloween, but you get the gist.

ICONIC. Last year I FINALLY sewed the Bjork swan dress of my dreams! I won the costume contest and the hearts of all Bjork dorks out there. I wanted to do this costume for years and was so happy that it came together how it did. It’s an iconic look and will keep well for future use.

I can’t wait to show you what I’ve whipped up for this year! Stay tuned…