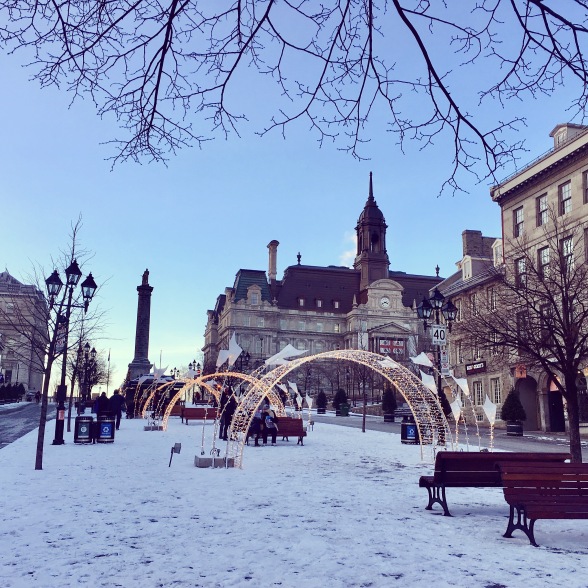 This year has been a pretty busy time for me with travel, especially work travel. Luckily I had the chance to attend a gaming conference in Montreal last week, during their FIRST BLIZZARD OF THE YEAR! Wooo! Even though I’m from Texas, most people don’t realize that I was actually born IN A BLIZZARD in Germany (or at the time, West-Germany as the Berlin wall was still intact) and I also spent about 4.5 years growing up in Ohio. I have had my fair share of experience with cold weather and snow, and I love it. My body temperature naturally runs hot, so hot temps are pretty miserable for me. (HOW DID I EVER LIVE IN TEXAS?! I have no idea…I am a furnace that profusely sweats. But moving on to more attractive things…like Montreal!)

I actually made it to town a night early to meet up with my good ole concert buddy, Jordan, who lives close to the border in Vermont. We hung out in the trendy Mile-End neighborhood (which also happens to be one of the coolest places to live in the world, who knew?!) and caught up, ate delish food, and karaoked at a really cool LGBT dive bar! #karaokequeen

If this isn’t a poster for a guaranteed good time, I don’t know what is!

I started the week off by brainstorming with coworkers in a quaint and super cozy cafe with the best tomato soup I’ve ever had. #getinmybelly 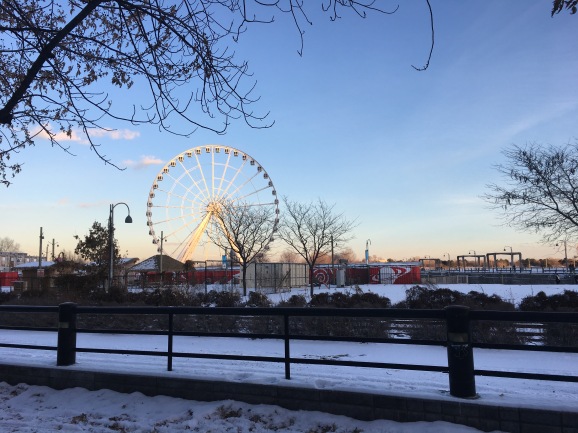 While I did have meetings, client dinners, and events to attend, I was able to have a good amount of solo time to walk around the city and explore on my own. Old Port of Montreal stole my heart – it might be the most charming city in North America! AND THE FREEEEENCH! I oddly took French in high school (yes I know everyone else took Spanish but I was the different, alternative, quirky girl – OKAY?!!) and conveniently forgot everything (I DO remember how to ask to get to the bathrooms though, and that’s a very important ask!).

Late night poutine at La Banquise was everything. We opted for the traditional poutine PLUS bacon. It was heaven. THE END.

LOOK AT THIS CRAZY SNOW! It happened within 12 hours and what was once an easy walk around the corner to the conference center became snow ridden.

Inside the conference center was amazingly beautiful and WARM. 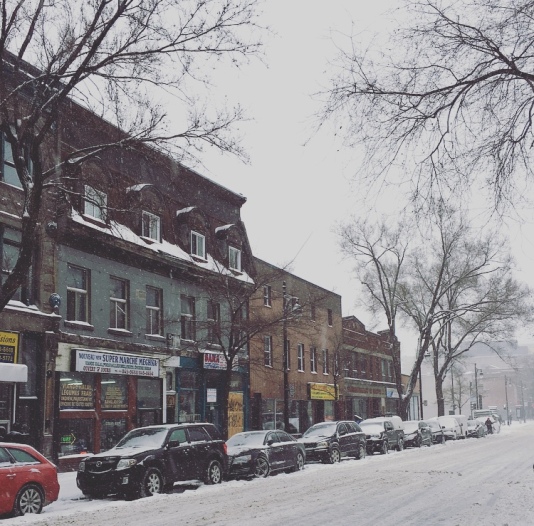 The last night in Montreal I actually had time to get dinner alone and explore a bit before the big end of conference party, and I was SO happy for some solo adventures!

This restaurant was where Charles Dickens wrote A Tale of Two Cities back in 1842. They also happened to have bomb dot com spaghetti, which is one of my favorite foods, and just what I needed to combat this cold weather. SO cozy! 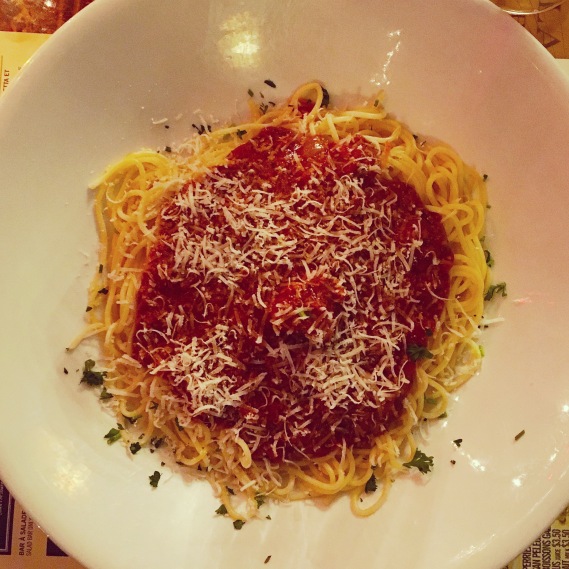 I mean LOOK AT THIS PIC! It does a great job of capturing the cozy winter wonderland that I found myself in.

I randomly stumbled into this underground speakeasy called The Coldroom while I was in Old Montreal. I found it on Yelp and saw it had 5 STARS, so I thought, why not? It took me a minute to realize that this was no regular bar but indeed an underground speakeasy that required me to ring the doorbell of the CORRECT door and wait for someone to let me in. I waited 5 minutes in the snow in an alley wondering if this was a good idea. Long story short, it was THE BEST idea I had all week. After descending down a few flights of stairs underground (and yes, again wondering if this was a good idea, me being led down a dark stairwell underground as a female alone in a “foreign country” but trusted my gut that it would be worth it) – I finally stepped into one of the most magical bars I’ve ever seen. Total privacy. Everyone was local and spoke French. Unique cocktails – it was perfect! I opted for a beet cocktail conveniently called “Beauty and the Beets” 🙂 which sounds weird but was insanely good. Before leaving, the bartender told me to check out the Christmas pop up bar in the hotel across the street, which you can’t find anything about online. Soooo, I had to ya know? 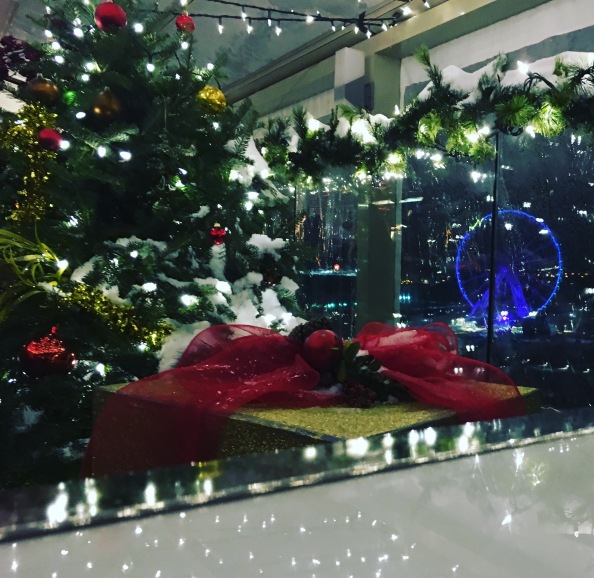 This is the view from the top of the Hotel William Grey at the Miracle Bar Christmas pop-up. It was fully decked out in Christmas decor and everyone who worked there wore ugly sweaters. From this table you can see the Ferris wheel in the port. It was a lovely surprise and I’m happy it worked out that I could visit.

After my solo jaunt, I headed to our close out event with clients. It was held in a co-op work space, so not really like a bar or event venue. It was a crazy time, and a group of us headed out to karaoke after in a tiny bar back over in the Mile-End. I think I sang like 10 songs but who is counting… ❤ #foreverkaroake

All in all my first time to Montreal was a complete success! I wish I had more time to explore, but I need to come back with John. Apparently they have a really cool biodome and also they have IglooFest in the winter, which is basically a crazy EDM festival in the snow (GOOGLE IMAGE IT – IT’S NUTS). But I really want to come back in the summer when we can do more things outdoors, like hike or kayak or ride bikes.

Sweet Montreal, a slice of Europe in North America. 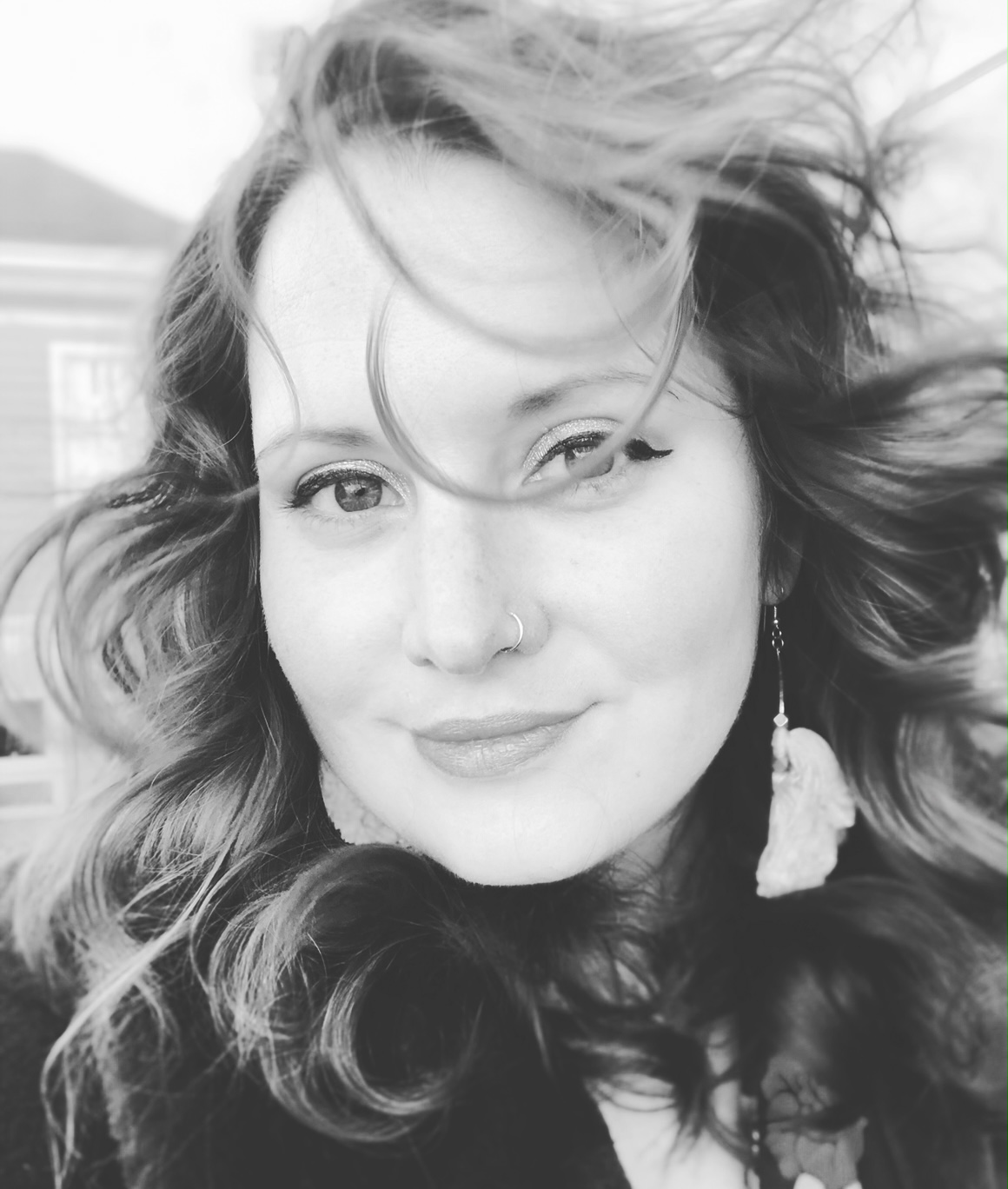 I wrote a little about my experiences living in a pandemic, of quarantine in both California and Texas. Link in bio. ❤️
Follow your path and chase your rainbows. Wherever they may lead. 🌈
I have never hiked trails by a cemetery before, so now I can check that off my list. Because this random hike in Georgetown was just that. A hike by a 100+ year old cemetery.
Busy city, rain or shine. ☀️ ⛅️ 🌧 #atx